Posted by Unknown at 8:06 AM No comments:

HOSA (Health Occupations Students of America) held its first meeting of the year after school on September 12.  The 23 students attending welcomed the newly elected HOSA officers.  Congratulations to the 2012-2013 officers inducted at the meeting.


HOSA hosted  a bake sale on Friday, September 21, at the Career Center to raise funds to  send students to the HOSA Fall Leadership Conference held at Blue River Community College, in Independence, Missouri. 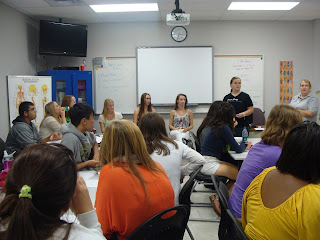 Posted by Unknown at 7:51 AM No comments:

We are pleased to announce our first

Served in front of RBHS Planetarium

Non-Rock Bridge Customers
11:45-12:45 is the best time to come to avoid the rush during lunch shifts

Are you taking the ACT on October 27, 2012?  If so, it’s not too late to sign up for the ACT Test taking strategies workshop offered through Columbia Area Career Center’s Professional and Community Education Division. The classes are offered on three consecutive Saturdays prior to the 27th from 8:30 am to 12:30 pm. The cost is $109.00 and is taught by the owner of The Total Learning Center, John Houmes, M.Ed. The workshop is designed for students 9th grade and older as they prepare to do their best on the ACT and is designed to help reduce the stress of the ACT in several ways: by increasing student understanding of the test, by reviewing English and math concepts, and by teaching effective test taking strategies for all sections of the test. The greatest benefit is achieved by completing the practice test in the Preparing for the ACT assessment 2012-2013 booklet. Students can register online  at www.career-center.org/adult or at the Professional and Community Education office in room number 147 of the Career Center, prior to the date of the first class on October 6.
Additional workshops are offered prior to the ACT test dates in December, February, April, and June. Call 573-214-3803 for more details.
Posted by Unknown at 11:22 AM No comments: