Check out the the Career Center Flower Shop and Greenhouse flyer for the Easter/Cool-Season Vegetable Sale!  The sale will be on Thursday, April 5 from 9:30 am - 5:30 pm.

And a helpful note from instructor Sherrie Rodekohr:

I know the weather is warm earlier than ever and many of you are eager to plant flowers outside, BUT the warm season plants will not be ready for sale yet!   It won't be long though!  Watch for details for next sale soon.

There still COULD be a hard frost in our area, so unless you are prepared to cover tender warm-season plants, stick to the cool-season plants for now!
Posted by Unknown at 1:48 PM No comments:

Pete Eichholz and Scott Fuenfhausen, DECA Advisors for Columbia Area Career Center, are proud to announce the results of the DECA State Career Development Conference that was held at the Lodge of Four Seasons at the Lake of the Ozarks from March 18 – 20. More than 1,400 students from the 12 State Districts competed in the three day event including 16 Hickman and 22 Rock Bridge DECA members. Students finishing in the top six spots in individual events and the top five in team events advance to the International Career Development Conference which will be held in Salt Lake City, UT in April.

The DECA competition is divided into two parts. Students first take a 100 question exam which tests basic marketing knowledge. The second portion of the competition is “role play” where students are given a marketing situation in which they must develop a solution and then present that solution to a judge who rates their solution. The final score is a combination of the two parts.

The following DECA students qualified for nationals in Individual Events:

The following DECA students qualified for nationals in Team Events:

Top Finishers who medaled but do not qualify for nationals:

Graciously written by our Laboratory Science instructor, Christine Roberson, who has served as teacher and mentor to our students:

Spirits were high, and students appropriately rowdy, as the short bus and one brave car caravanned 12 students, (including Rock Bridge, Hickman, and Hallsville High School students) from the Career Center to St. Louis for the Junior Science Engineering and Humanities symposium, held March 15- March 17.  Long hours of research, writing and practice during evenings, weekends and summer were distilled into mere minutes of student presentations.  Nikhilesh Sharma led the charge by presenting his paper on Thursday night during the informal sharing sessions.  He then joined fellow debate team members Micah Fletcher, Michael Pisano and Abby Thompson to defeat two other teams to advance to the debate final.

Fresh from Thursday night’s debate victory, Friday morning saw Michael Pisano, Nick Sun and Walter Wang going head to head in the general biology competitive section.  After cheering each other on, and wondering how well the presenters had placed, all students attending symposium then quickly rushed to their industrial field trips, hosted by places such as Solutia, Sigma, Monsanto and the Danforth Plant Sciences Center.

Following the industry field trips, the debate team rallied together.  After arguing the more difficult pro side of the resolution, and being bombarded by questions from the audience, the debate team suspected they had not been embraced by their peer judges.  They would have to wait until Saturday morning to find out.

However, on Friday night, the waiting to find out the winners of the general biology section was over.  Walter Wang was awarded second, and a visibly shocked Michael Pisano was awarded first place in the general biology section for his research on the effects of Bt toxin on earth worms.  First place earned Michael an expense paid trip to Bethesda, Maryland for the national JSHS symposium, and more work to prepare to talk to the 250 person symposium Saturday morning.

However, the waiting was over for the debate team.  Thanks to the long hours put in by team members and coach Nick Flinn, another Rock Bridge student, the debate team won, bringing back a large trophy and $1000 to fund future student research.

Winning the debate was not the last piece of good news for the CACC symposium attendees.  Michael placed 4th in the entire symposium, and will be presenting a poster of his research at nationals.

Despite late nights and long days, the bus ride to Columbia was boisterous.  Students compared trophies and industrial field trips, discussed student research, and even talked about doing a project next year. The CACC students attending JSEHS returned to Columbia exhausted, victorious, and inspired to try again in 2013.
Posted by Unknown at 8:31 AM No comments:

Check out the photos! 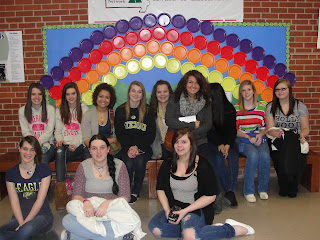 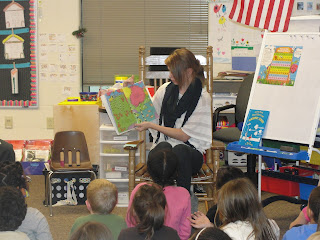 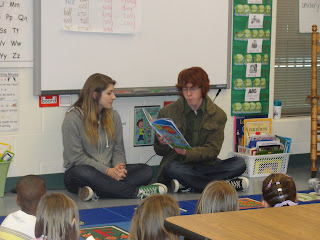 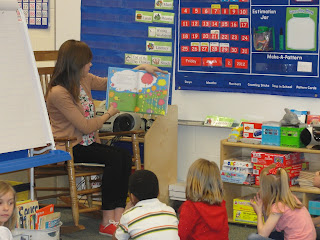 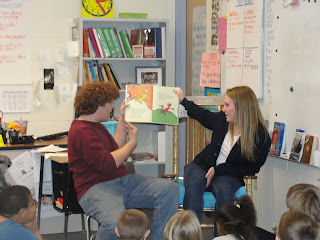 Syed is a marketing student and Rick is a laser technology student at CACC.

Syed and Rick are the fifth Rock Bridge debate team to compete in national competition.
Posted by Unknown at 9:10 AM No comments:

Of the four CPS students chosen for the Missouri Scholars 100, one is a current CACC student and another is a former CACC student.  Congratulations to Rock Bridge senior Christian Ackmann, student in instructor Jeff Cochran's digital video and motion graphics, and Jeremy Lombardo, who took digital media with instructor Sandy Morrow.

The Missouri Scholars 100 is a statewide program honoring 100 of Missouri's top academic students in the graduating class of 2012. The program is sponsored by the Missouri Association of Secondary School Principals. Selection is based on grade point average, ACT or SAT scores, class rank, courses taken, attendance, involvement in extracurricular activities, and service as a positive school citizen.

Job well done, gentlemen!
Posted by Unknown at 9:09 AM No comments:

CACC's culinary program sees Global Village as an opportunity to expose students to a wide array of foods and methods of preparation.  Teams of two or three researched an assigned country, developed a poster, and then prepared a dish for serving at Global Village.

Take a look at a smorgasboard of photos below!

Posted by Unknown at 7:15 AM No comments:

Take a moment to see if you are eligible! What a great opportunity for our students!

Eligibility:
In honor of Arden Boyer-Stephens’ commitment to the Career Area Career Center (CACC), CMNEA will award a scholarship of $500 to a graduating senior who is attending the CACC and who is pursuing a degree from an accredited college in an area related to the their CACC program of study. Applicants must attend Columbia Public Schools. Special consideration will be given to children of CMNEA members. A committee of CMNEA members will evaluate applications and essays and award the scholarship to the best candidate at the CACC Outstanding Student Ceremony, held on May 10, 2012 at Jesse Hall, University of Missouri – Columbia.

Guidelines:
Complete the following application and attach an essay of 300 words or less. The application deadline is April 13, 2012. Applications should be sent to Laurie Spate-Smith at Jefferson Junior High School, 713 Rogers Street, Columbia, MO 65201.

Essay Topic:
Describe how you discovered your career interests and who supported you in this process.
What are your career goals and how do you plan to achieve them?

Students stayed awake from 10 pm to 7 am last weekend, playing Guitar Hero, Harry Potter Scene It, Clue and a very random game of charades.  Along with four (very tired) teachers, the Health Occupation Students of America (HOSA) learned what it would be like to take the night shift and how tough it is to stay awake during those wee morning hours when everyone else is asleep.

Medical services take no rest, and neither do teenagers, apparently!
Posted by Unknown at 10:55 AM No comments:

Fitzpatrick Selected to Present in Dallas

CACC and Rock Bridge senior Landon Fitzpatrick has been selected from thousands of applicants to present at the Student Television Network Convention in Dallas, Texas in late March.  Fitzpatrick has taken three years of broadcast journalism classes with instructor Haley Brueck and is also currently interning with KOMU 8.

The STN convention will bring together two thousand aspiring student-journalists and their teachers from around the country for a week of workshops, lectures, and contests.  Brueck will take six students to the convention.

Check back next month to see how our BroJo students fare!
Posted by Unknown at 9:36 AM No comments:

"Robots have become an integral part of safety and security in recent years. It's great for our students to see what they can do, and to see how career fields like security and electronics are easily integrated," said Martin.

Check out pictures below! 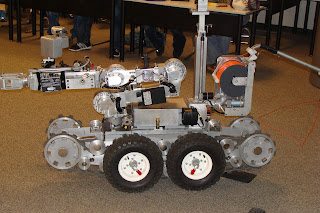 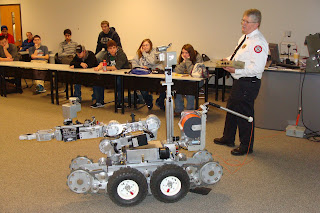 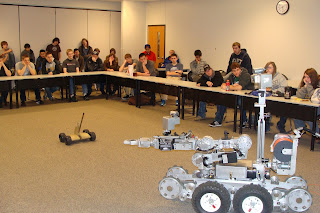 
Columbia Area Career Center was transformed into Kitchen Stadium last night as a friendly Iron Chef style competition pitted five teams of two against each other for the ultimate battle of culinary prowess.  The teams consisted of an American Culinary Federation apprentice/Jr. Member from the University Club kitchen and an advanced student from CACC’s very own culinary arts program. 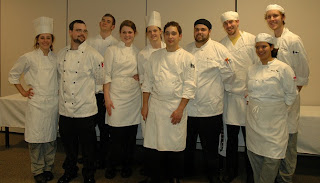 Teams prepared a three-course meal for a table of eight as well as plates for viewing and judging.  The University Club provided the judges for the event.

CACC Guidance Counselor Amelia Fagiolo sat at table one with a meal prepared by apprentice Casey Rotert and current CACC student Heather Pitt.  Said Fagiolo: "Our food was delicious!  As someone who loves food and watching TV shows like Iron Chef and Chopped, it was cool to experience the process in real life."

Ultimately, the duo of apprentice Scott Gestring and CACC student Bianca Mello came out on top with their Smoked Trout Profiterole, Stuffed Pork Loin, and Raspberry, Marscapone, and Pistachio Tart.  The two won an all expense paid dinner, valued at $200.00 plus the opportunity to help out in one of the top kitchens in either St. Louis or Kansas City.


Here are some photos from the event:

It's a three hour drive to Ottumwa, Iowa from Columbia, but it's worth every second for the students making the trip north to check out Indian Hills Community College. Two CACC instructors accompanied 24 students on an overnight college visit to the nationally recognized Laser/Electro-Optics training program with the hopes of becoming acquainted with the campus and curriculum.

CACC and Rock Bridge senior Jordan Davis will be a freshman in the 21-month program in August. "I went on the trip because I want to become familiar with Indian Hills' campus and meet people I'll be working with in the fall," he noted, adding that the 21-month program will be "intense, but will be worth it when I come out of college with a lot of career options."


The Career Center partners with Indian Hills through the articulation process.  This partnership provides our students a jump-start into the IHCC Laser/Electro-Optics degree program by awarding eight semester hours of college credit for the competencies they master while studying Laser/Photonics Technology at the Career Center.

"We love sending our students to Indian Hills," said dual credit and articulation coordinator Sharon Nelson. "This trip is so positive.  The kids learn about a potential post-secondary option and spend the day in Ottumwa.  It's a great experience."

For more about the Lasers-Photonics program at CACC, check out this video!

Posted by Unknown at 7:58 AM No comments: